Ms. Narayanan, an Auburn, Alabama native, is pursuing a double major in Biochemistry and Spanish. Since enrolling at Auburn in the fall of 2013, she has been an active participant in undergraduate research in biochemistry field. Under the direction of Dr. Bradley Merner, in the department of Chemistry and Biochemistry, Ms. Narayanan has developed a short, 9-step synthetic sequence to a complex bicyclic nucleoside precursor that will serve as a key intermediate in the synthesis of several, new nucleic acid modifications for antisense technology. 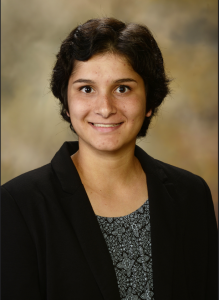 Among her many awards and honors, she was a 2015 Goldwater Scholarship Honorable Mention; she placed first in the Undergraduate Oral Presentation at the 2014 Southeastern Regional Meeting of the American Chemical Society; she is a 2015-2016 Undergraduate Research Fellow; and a recipient of the 2014 Cellular and Molecular Biosciences (CMB) Undergraduate Summer Research Scholarship.

The Goldwater Scholarship Program was established to provide scholarships to outstanding students who intend to pursue careers in mathematics, the natural sciences and engineering. Each scholarship covers eligible expenses up to a maximum of $7,500 annually for undergraduate tuition, fees, books and housing. In awarding scholarships, the foundation of trustees considers the nominee’s field of study and career objectives along with the extent to which that individual has the commitment and potential to make a significant contribution to the field of science or engineering.