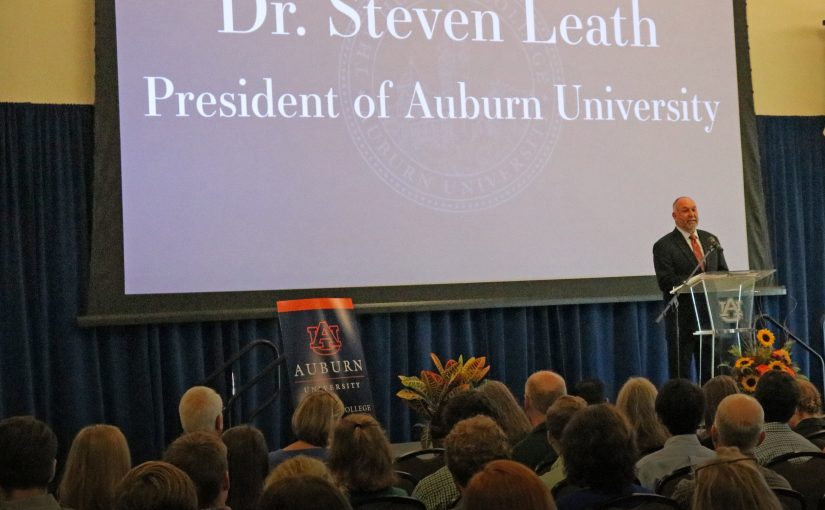 On Sunday, October 8, members of the 2017 freshmen class were inducted into the Honors College at Auburn University.

Student hosts, Kailey Beth Smith and Carter Williams, guided the inductees and guests through an afternoon of speaker experiences and observations culminating in the conferring of the Honors College lapel pin.

Much like the medal bestowed at graduation, this pin signifies membership within the Honors College.

The Honors College medals and pins are not only emblems of membership, but they also serve as recognition of the achievements and the rich undergraduate experiences that students receive here at Auburn University. Students should take pride in these items as they are a physical embodiment of their time and hard work. 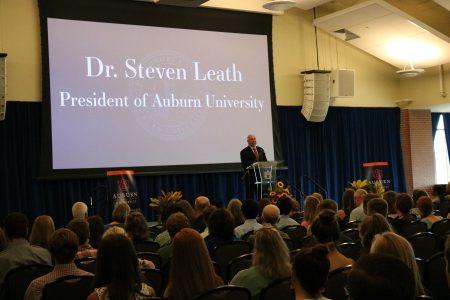 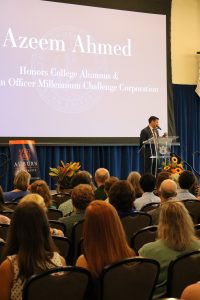 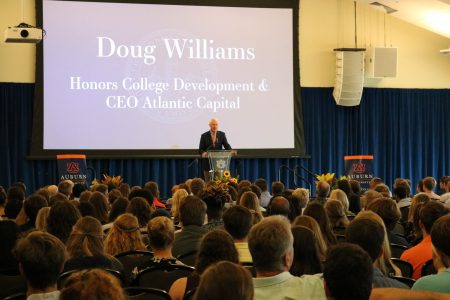 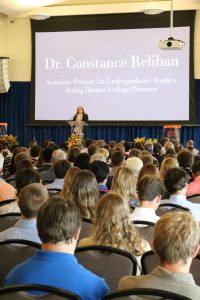 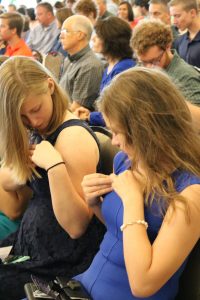 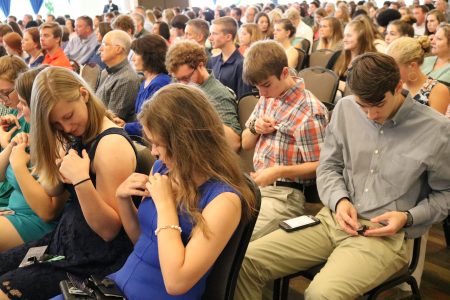 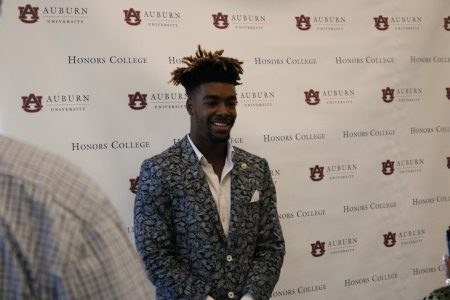 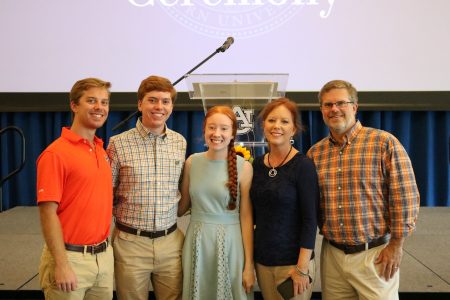 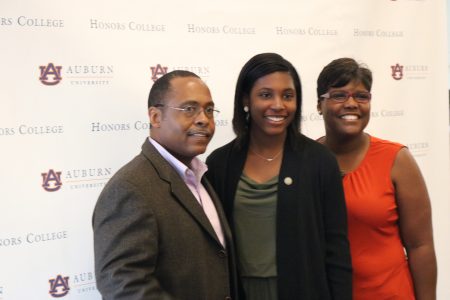 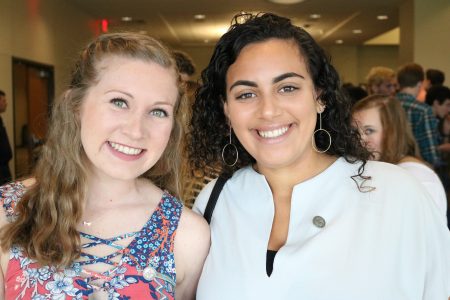 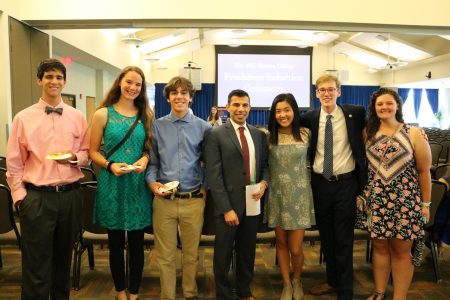 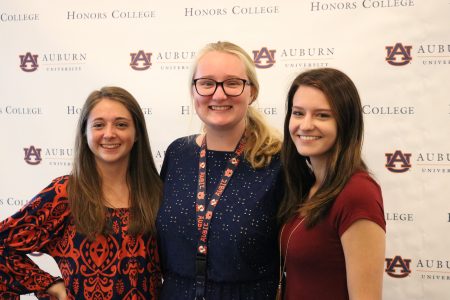 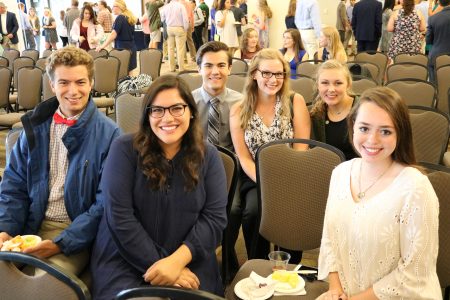 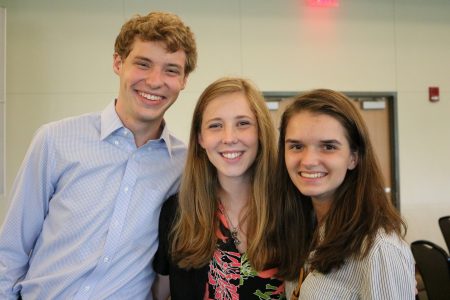 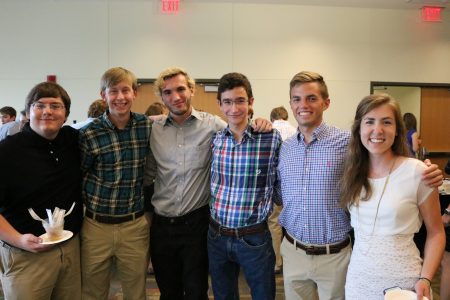 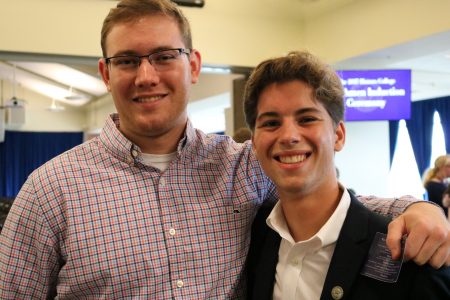 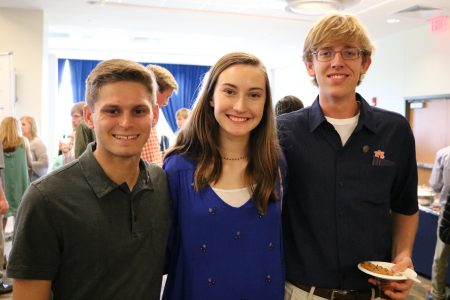 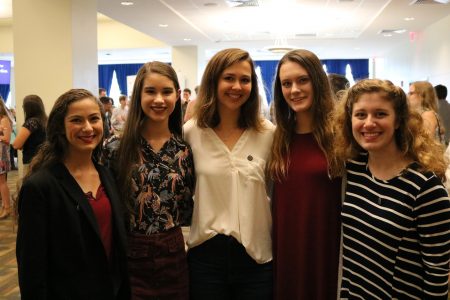 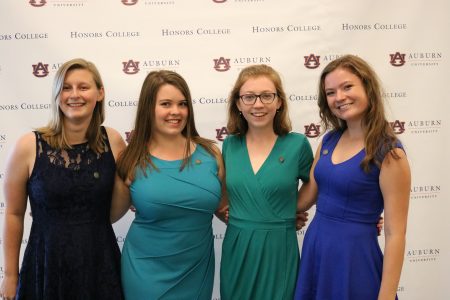 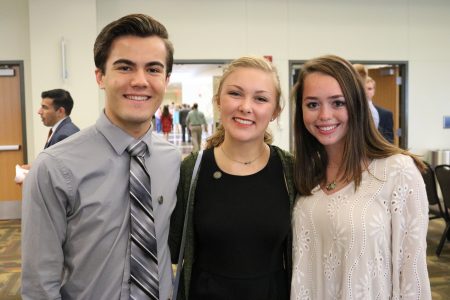 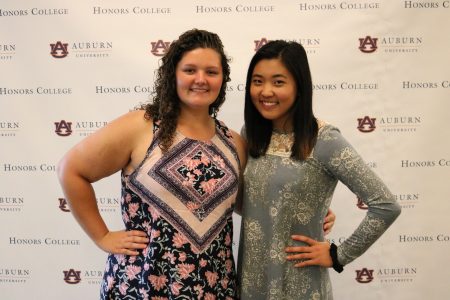 The event will be held Friday, August 25th, from 4:30-6:30 pm in the Upper Quad Greenspace. Read more about your hosts and the organizations participating in this year’s frenzy.

The Honors College and the Miller Writing Center will host a national prestigious scholarship information session Wednesday, June 7th from 1-2 pm in the Writing Commons located on the 2nd floor of RBD Library.

Undergraduate as well as graduate students who meet certain academic qualifications and who are U.S. citizens are eligible to apply for these awards

Congratulations to 2016 (Fall) Honors College graduate Carson Williford for his recent Fulbright scholarship award. Carson will be in Germany to teach English. 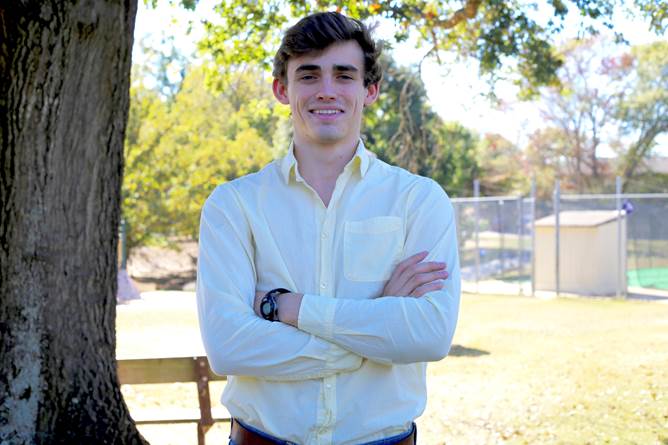 Congratulations to Honors College junior, Hallie Nelson for being named as a finalist in the prestigious Harry S. Truman Scholarship.

Read her full story on the Auburn University website.

This summer, Auburn University students discovered calculus through Michelangelo and geology through Roman rocks in their classrooms inside a 13th century Italian palace. Next summer students will have even more options to pursue coursework overseas through the Auburn Abroad Core Curriculum Program in Rome.

Launched in summer 2016, the Core Curriculum Program allows students to choose two from several courses required of all students such as communications, geosciences, math and political science while spending five weeks exploring one of Italy’s most historic and iconic cities. In summer 2017, offerings will expand to also include Honors designated courses, including POLI 1057 Honors Global Politics, COMM 1007 Honors Public Speaking, MATH 1617 Honors Calculus I, PHIL 1027 Honors Introduction to Ethics and SCMH 1010 Honors Concepts of Science. In addition to their six to eight credit hours, students also take a non-credit Survival Italian course to help them better understand and navigate the local culture. Read more about the requirements and view the application.

Auburn’s strategic plan calls for internationalization of the campus, and study abroad programs are one vital way to provide students with global experiences.

“We know that students who study abroad gain essential skills such as adaptability, communication, intercultural awareness and problem-solving,” said Deborah Weiss, Director of Auburn Abroad. “When students have the opportunity to go abroad early in their academic careers, they’re able to use those skills in the classroom as well as in their future employment. It brings a whole new perspective to their college experience.”

Auburn offers faculty-led study abroad programs in virtually every academic department. These programs are typically designed for students in a particular major. The Core Curriculum Program accepts students beginning in their sophomore year and is open to all students, regardless of major.

Interested students can view the new video of last year’s program to get a taste of the activities in Rome including tours of Florence, a food tour of Rome and student testimonials.

The 2017 Core Curriculum Program will run May 15 through June 15. Applications are due February 15, 2017, and students are encouraged to apply early. Students interested in any study abroad program are invited to attend the 30-minute Study Abroad 101 session offered Thursdays at 3 p.m. and Fridays at 11 a.m. in Foy Hall room 242.

Auburn University senior Sarah Pitts is a finalist for the prestigious Rhodes Scholarship. If awarded, she will be among 32 U.S. students to receive the honor of studying at the University of Oxford in the United Kingdom.

Pitts will interview in Birmingham in late November. Her selection marks the seventh consecutive year that Auburn University students have been named as finalists.

“Sarah has excelled throughout her time at Auburn University,” said Melissa Baumann, Auburn University assistant provost and director of the Honors College. “Through her commitment to her academic studies, her leadership activities and her volunteerism, she epitomizes the Auburn Creed. Her goals have been supported by many Auburn faculty and staff who have taught and mentored her. We are thrilled that she has been named a finalist and are pleased for her and her family that she may have the opportunity to add the Rhodes Scholar distinction to her list of impressive accomplishments.”

Pitts, a native of Birmingham, is an Honors College senior with a double major in English literature and Spanish and a minor in political science in the College of Liberal Arts. If selected, Pitts plans to pursue a master’s in world literatures at Oxford under the tutelage of Professor Ellke Boehmer, a former Rhodes Scholar, to study postcolonial literature with the goal of becoming a writer who aspires to abolish cultural barriers and forge global understanding.

Pitts has been involved in a number of campus and off-campus service projects. Among her more notable leadership and service achievements are her role on the Committee of 19, Auburn’s student chapter of Universities Fighting World Hunger; participating in the Blessings in a Backpack school nutrition program; serving as a volunteer peer-mentor with the Office of Accessibility; and being a member of the Auburn Flyers Club Cycling Team. Pitts’ faculty advisor is James McKelly, associate professor in the Department of English.

“Inside and outside the classroom, Sarah stands with a select group of her peers,” said Paul Harris, associate director for national prestigious scholarships in the Honors College. “She is an engaging scholar, kind soul and wonderful writer. On top of her impressive grades, service and undergraduate research, Sarah remains actively engaged in community outreach where her passion for helping others is exceeded only by her humility.”

The scholarship, one of the oldest in the world, is awarded to students with proven intellectual and academic achievement, integrity of character, qualities of leadership and proven respect for their fellow humankind. Founded in 1904, the Rhodes Scholarship is one of the oldest international fellowships and are administered by the Rhodes Trust, a British charity established to honor the will and bequest of Cecil J. Rhodes.

Nine Auburn University students are among the nominees for the nation’s top postgraduate honors, including the Rhodes, Marshall and Mitchell scholarships. Students awarded these scholarships will pursue their individual fields of study at prestigious universities in the United Kingdom and Ireland.

“These students evoke the core values of Auburn University,” said Melissa Baumann, assistant provost for undergraduate studies and director of the Honors College. “They have succeeded through hard work in their courses and extracurricular activities and they are men and women of character. These scholarships are some of the most prestigious international awards, and we are pleased to nominate them.” 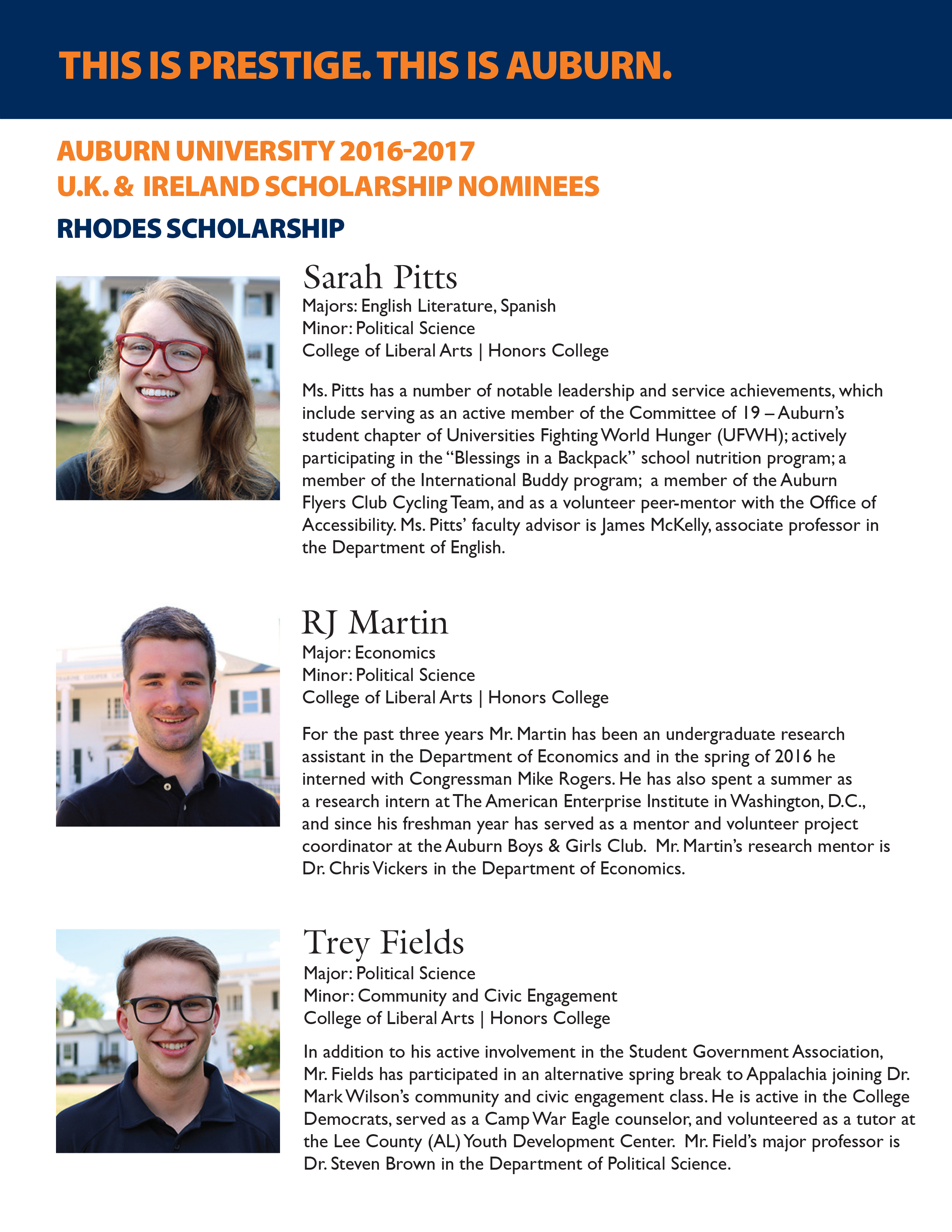 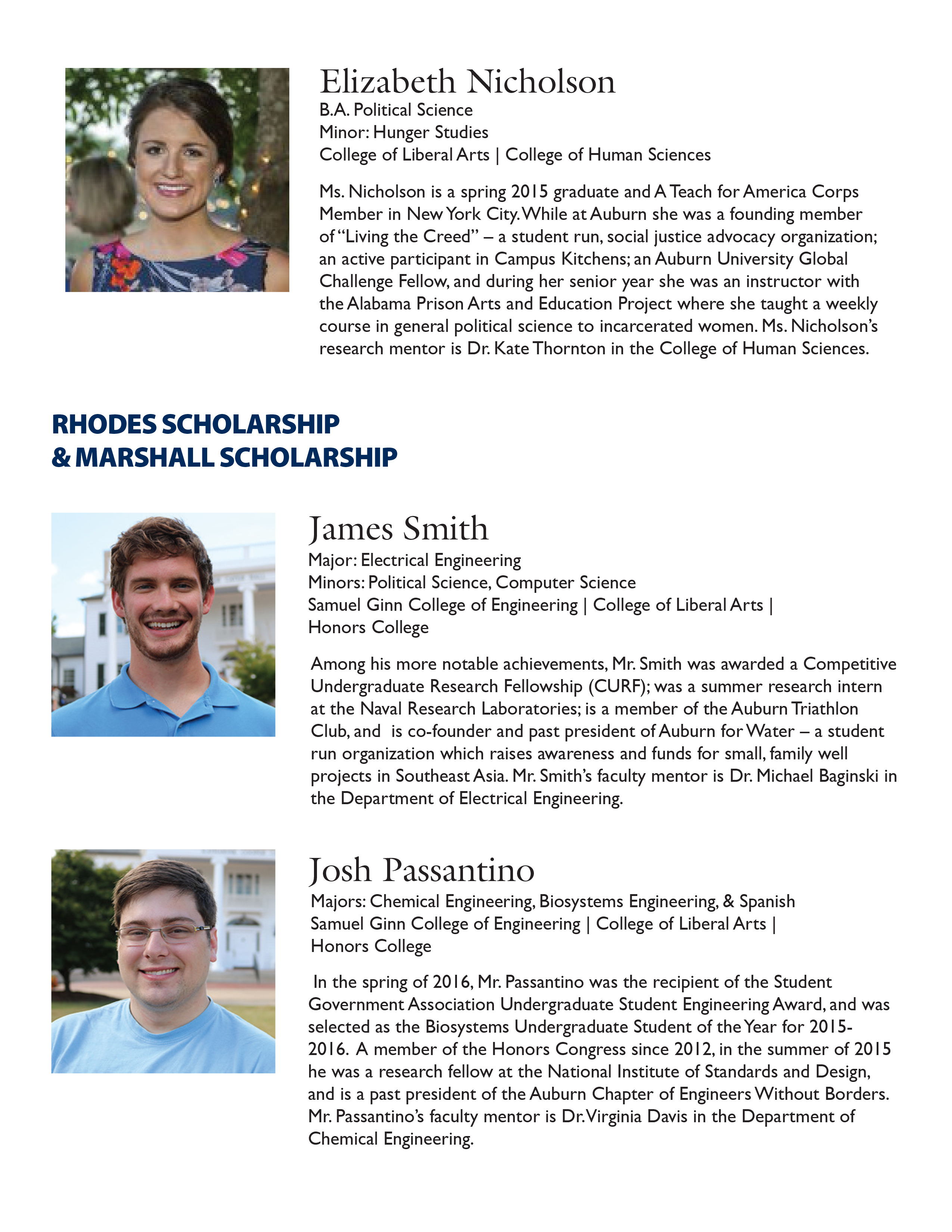 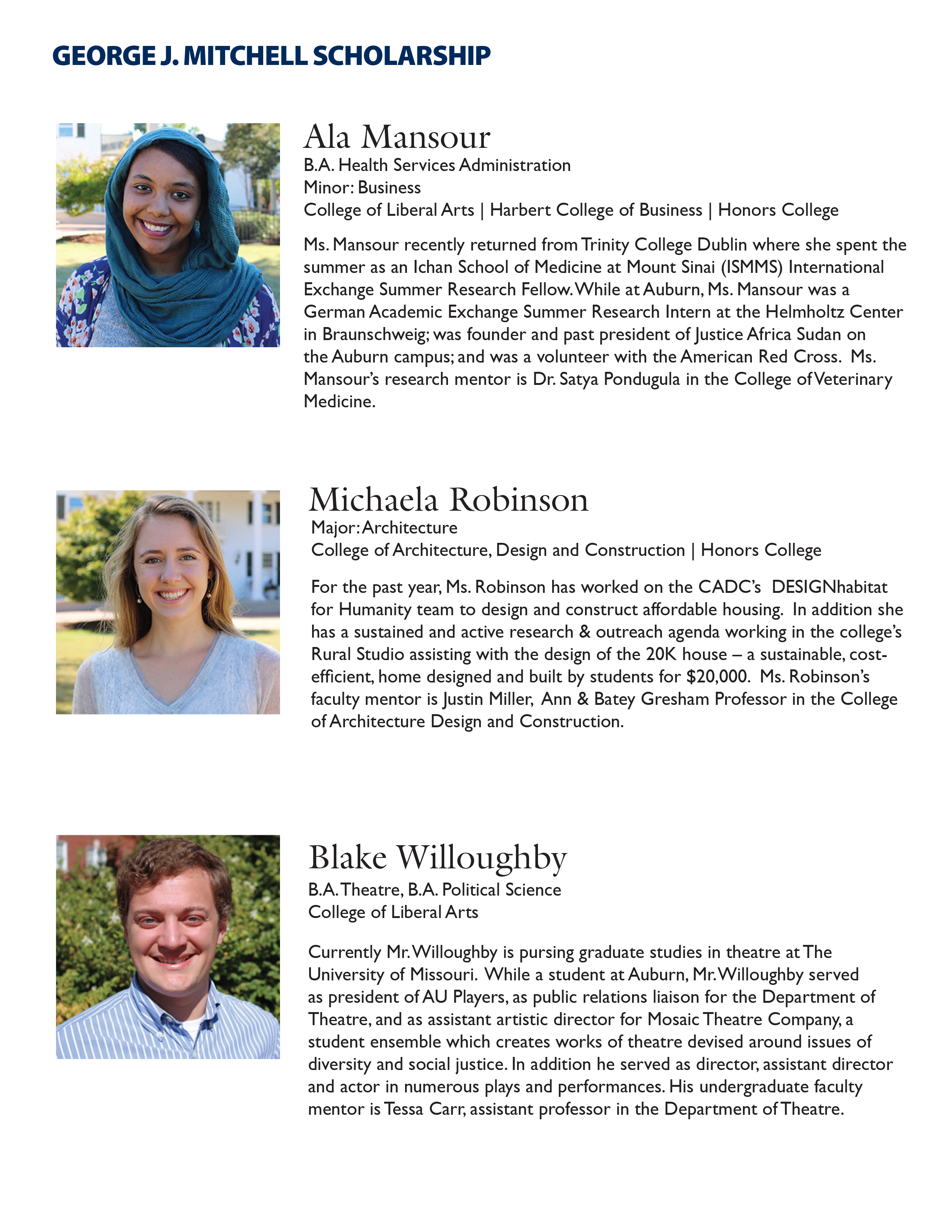 Honors Special Topics courses are one of the five ways Honors College students complete their Senior-Year Experience. Recent graduate Claire Sullivan created a refreshing Honors Special Topics project that not only beautifully reflects the people and places of Alabama, but fulfilled her requirements to graduate with the Honors Scholar distinction.

Students completing Honors Special Topics work with a departmental professor in their major or minor to execute a project of their choosing. This course is similar to Honors Research as it gives students an opportunity to work one-on-one with a professor on a project that is both interesting to them, and helpful in future endeavors (i.e. resume builders).

Visit HomeGrown and be inspired! 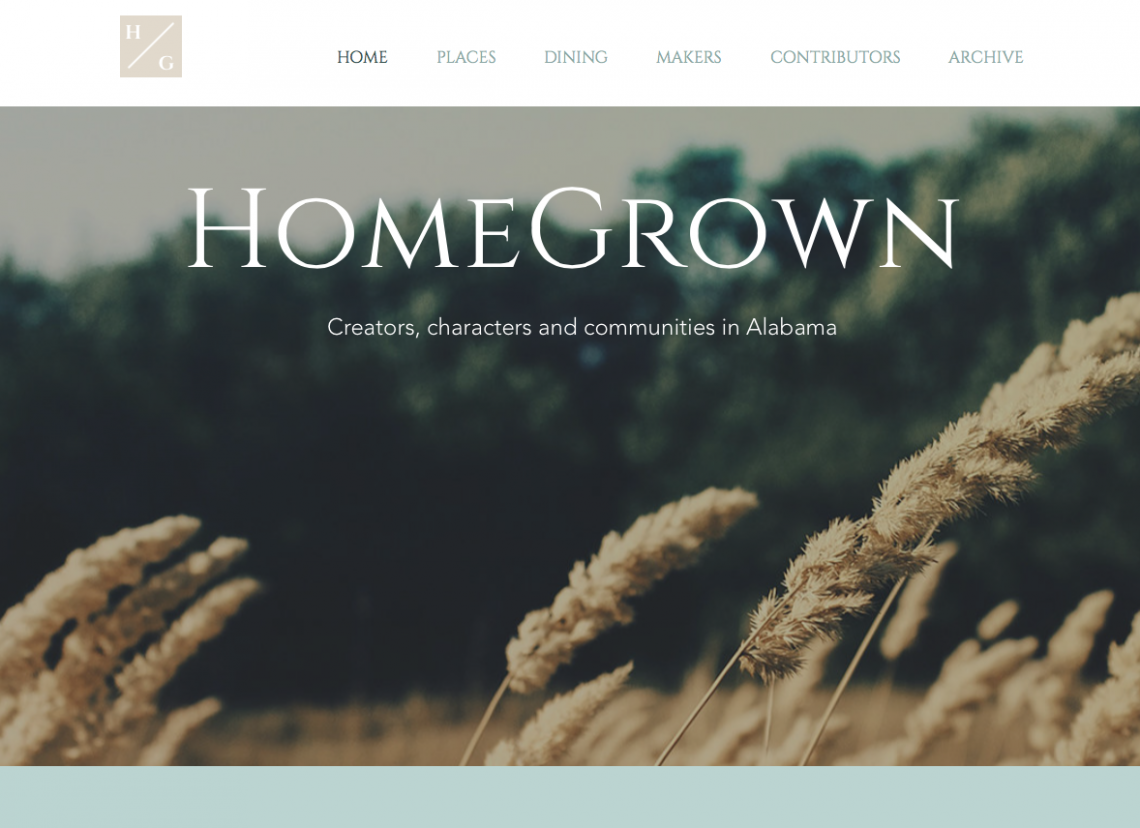