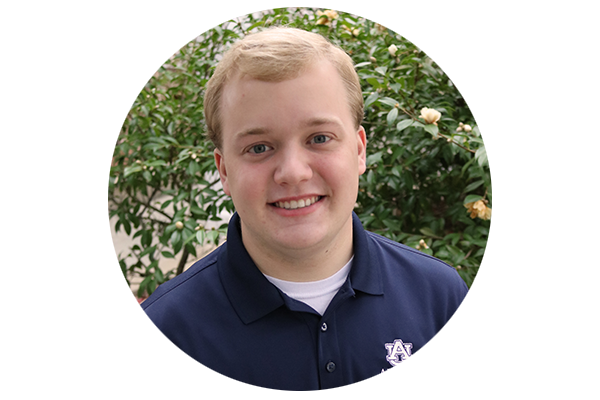 It is not often that a student has a genuinely life-changing experience, but that is how Riley Locke, a sophomore in computer science and Honors College Ambassador from Clanton, Alabama, described the 2019 Global Grand Challenges Summit.

The summit, held every two years and rotating between three countries, is an organization of students and engineers from the U.S., U.K., and China that formed in 2008 to set engineering goals for improving the planet. The goals set by the academies of engineering from these countries range in disciplines from education to medicine to cyberspace to the environment.

Dr. Edward Davis, an assistant professor in materials engineering in the Samuel Ginn College of Engineering, chose Locke to participate in the summit held in London this September. Dr. Davis said Locke is a “highly motivated student” and that during the summit he was able to engage with current leaders in engineering and the next generation of engineers.

As a student in the Auburn University Grand Challenge Scholars Program (AUGCSP), Locke had the opportunity to express interest in the summit. The AUGCSP’s primary goal is to produce students with the skills, broad knowledge, and ideas to develop solutions to the world’s most pressing technical issues and the engineering grand challenges.

Locke wants the organization to  grow not only within the engineering department but also into other departments. One of the focuses of the program is multidisciplinary study, and Locke said that this crossover to other departments is where the magic happens.

On the first day of his ten-day trip, Locke attended the finale of the intercountry competition where five teams from each country who had won a competition in their respective country competed.

For the rest of the first half of the trip, Locke participated in the student-collaboration lab event. Six-member teams—consisting of pairs of students from each of the three countries represented at the summit—collaborated to come up  with a product that would help solve one of the grand challenges. Locke joked that this hefty task placed “no pressure” on them.

A mentor assisted each group. Locke’s group actually used their mentor’s own research to inform their product proposal. Their mentor, a chemical engineering professor from China, is working on the creation a model for turning bamboo into aerogel insulation. Since Locke’s  academic focus is coding, he said this product made him “get out of [his] comfort zone” and explore another kind of engineering.

During these first few days, the students also went to break out sessions where they learned about entrepreneurship, how to grow the Global Grand Challenges program, and the theme for this year’s summit. The theme, “Engineering in an Unpredictable World,” encourages students to think about how engineers can help solve the challenges created from a global population of 10 billion people, and whether AI and other transformational technologies can change our world for the better.

The summit took place during the last five days of Locke’s trip, where he said, “things get really fancy.” The trip became a business formal event with well-known academics, industrialists, entrepreneurs, and invited speakers from around the world.

Locke was able to connect with leaders of Lockheed Martin. When he returned to Auburn the next week, Lockheed Martin was recruiting on campus. He said it was “kind of like fate.” Locke spoke with the recruiters and was able to get a summer internship with the company.

When asked about the most important experience of his trip, this networking opportunity was one of Locke’s top choices. Another key experience was befriending fellow students from all three countries. During the day, he said, “you give it your full attention because it deserved your full attention,” and afterward, “you go out at night with other students to see the city and have fun.” The pace of the ten-day experience was tiring, but Locke still wishes he could have seen more of London.

As possibly the youngest student participant attending the summit,  Locke felt mentored by every other student. They encouraged him in his education and his fight against the “imposter syndrome” that is common to college students. Locke said these students getting jobs at large companies and doing incredible things inspired him.

The summit also helped Locke see the big picture of what engineers can do. Dr. Davis described the summit as showing “that engineering serves humanity and that engineers should work together to solve society’s problems.”

Locke’s participation in the summit, the networking with leaders in engineering, and the friends he made from around the world all helped him realize that he is capable of more. He said he recognized his own self-worth within the field and elevated his dreams for the future.