Eight Auburn University students and alumni have been awarded National Science Foundation Graduate Research Fellowships, an Auburn record.
The National Science Foundation announced earlier this spring that four current Auburn University graduate students and four graduates have been selected for the prestigious NSF Graduate Research Fellowship. The fellowship provides three years of support at $30,000 annually and an additional $10,500 cost of education allowance. The purpose of the fellowship program is to help ensure the vitality and diversity of the scientific and engineering workforce in the United States.
“We are especially happy to see the increase in the number of Auburn students being awarded this most prestigious fellowship,” said Melissa Baumann, Auburn University assistant provost and director of the Honors College. “This award would not be possible without the support and mentoring of dedicated Auburn University faculty.” 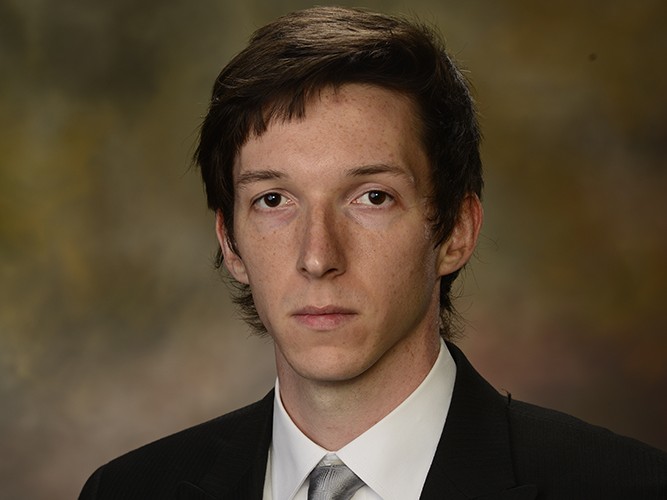 Four Auburn University Honors College students who graduated this spring have been awarded Fulbright Scholarships. Tyler Look, Matthew Goforth, Matthew Pollock and Steven Vickers will continue their studies in Berlin, Munich, the village of Trittau in Germany, and Latvia, respectively.
In the past six years, 14 Auburn University students have been named Fulbright recipients; this year’s four students is a school record.
Houston native Look graduated from the colleges of Business and Liberal Arts with a double major in aviation management and German-international trade and a minor in Spanish. He was awarded a Fulbright Scholarship to examine public transportation systems at the Technical University of Berlin. In 2014, Look participated in the Auburn University exchange semester in Germany where he earned the Goethe Institute German Language certification. While at Auburn, Look was a four-year member of the Marching Band.
“The focus of my research is to analyze the economic, political, social and environmental factors that specifically influence citizens to choose various modes of transportation within a densely populated city,” Look said. “I am looking forward to spending the next academic year abroad and to the adventures that lie ahead.”
Huntsville native Goforth graduated from the colleges of Sciences and Mathematics and Liberal Arts with a major in physics and a minor in German. He has conducted research on fusion energy plasmas under the direction of David Maurer in the Department of Physics for the past year and a half. He was awarded a Fulbright Scholarship to continue his research on complex plasma experiments at the Technical University of Munich where he will join the Complex Plasma Research Group at the German Aerospace on the university’s campus. Goforth is the son of a retired U.S. Army officer and was born in Ansbach, Germany.
“My work at the German Aerospace Center will include the planning of complex plasma experiments as well as providing a detailed analysis of space data using specially adjusted image analysis techniques,” Goforth said. “I am eager to join leading German scientists and researchers in support of the International Space Station. My Fulbright year promises to be a life-changing experience and I am grateful for this opportunity.”
Port Orange, Florida, native Pollock graduated from the College of Liberal Arts with a double major in English literature and Spanish and minors in linguistics and German. He was awarded a Fulbright English Teaching Assistantship to teach high school students in the northern German village of Trittau. Pollack served as a tutor with the Miller Writing Center for the past two years and last summer attended the Goethe Institute in Berlin summer language program.
“My work as a tutor in the Miller Writing Center has prepared me well for the rigors of teaching English in Germany,” Pollock said. “Of course, teaching is a two-way street and I look forward to improving my German language skills and cultural competence while abroad.”
Mobile native Vickers graduated from the College of Liberal Arts with a major in history. He was awarded a Fulbright English Teaching Assistantship to teach English to high school and middle school students in Riga, the capital of Latvia. Before coming to Auburn, Vickers served on the City of Mobile Police Department for six years. For the past two years he has served as a tutor with the Athletics Department.
“My experience as a police officer in Mobile forced me to see the world from many different perspectives,” Vickers said. “In Latvia, I will be immersed in a culture completely different from my own which will challenge me in way I could only imagine. I am looking forward to the challenge.”
“We are excited for Tyler, Matthew, Steven and Matthew,” said Melissa Baumann, Auburn assistant provost and director of the Honors College. “The Fulbright award is an acknowledgment of their hard work and their potential for future accomplishments in their disciplines. They are all outstanding representatives of Auburn University and we send them off with sincere wishes for great success.”
“The Fulbright offers our students a life altering experience” said Paula Bobrowski, associate dean in the College of Liberal Arts and chair of the campus-wide Fulbright screening committee. “This international experience will forever change their views of the world and help them to realize how they can make an impact on the world.”
The Fulbright Program is the flagship international educational exchange program sponsored by the U.S. government and is designed to increase mutual understanding between the people of the United States and the people of other countries. Recipients are selected on the basis of academic or professional achievement, as well as demonstrated leadership potential.
“I thoroughly enjoyed working with our scholars throughout the application process and their selection brings great credit upon Auburn University,” said Paul Harris, associate director of the Honors College. “I am especially grateful to their faculty mentors Tom Nadar, associate professor of German; James Truman, assistant director of University Writing; David Maurer, associate professor of physics; and Alan Meyer, assistant professor of history, who all provided support and encouragement and wrote glowing letters of support on their behalf.”

To read the full story …